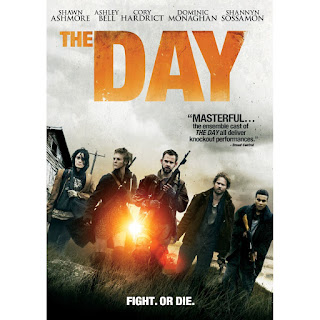 The Day is the kind of movie that puts its cards right on the table.  Yeah, it's a mix of other post-apocalyptic movies that have been made before, namely The Road, but so what?
I really enjoyed the way The Day begins.  It gets right to it.  A set of people trying to survive with little hope of finding food or safety spot an empty house, settle down, and they realize the house is a trap.  Then the band of cannibals show up, our survivors fight back, and the bodies start to fall.  Action, you got it.  Fast moving.  You betcha.  But...
Going beyond the surface, The Day is almost too streamlined.  You don't get enough background on the band of cannibals.  You barely see their camp for God's sake.  And come to think about it, you don't see any flesh eating either, so what the hell?  You don't get much background on the main characters either, so by the time it's over, you're not really left with much to chew on (pun intended).
The whole affair is a bit thin.  Just one night of survival, let's see who lives and who dies.  That's really the movie in a nutshell. The Day does have its moments, especially in the second act, but it doesn't seem like a complete thought, or the thought is way too short to mean anything.  And the bloodshed is mostly CGI.  Blech!
Rent it, but don't expect to be talking about the movie the next day to anybody. I have to add, Ashley Bell, the girl who's also in The Last Exorcism, does an excellent job in the film. She easily gives the best performance of the whole damn movie.  I hope to see her in more genre flicks.
So okay, it's got action, it's fun for one viewing, but it sure could've easily been a lot better.  Also, a certain actor dies really early on that might disappoint a lot of people.  You can guess who that might be.
Movie Grade: C+