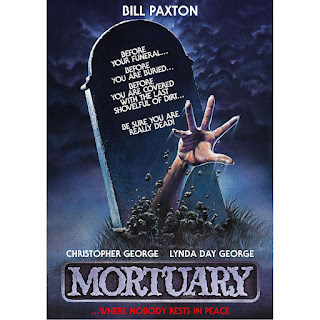 Katarina's Nightmare Theater is at again with this DVD release of Mortuary.  Scorpion Releasing's put out a cleaned up version that's a very nice collectible.  But as far as the actual movie goes...

This should be the coolest movie ever, right?  You get a young Bill Paxton and two people from the cast of Pieces, Christopher George and Lynda Day George.  You've got the recipe for cult coolness, but what you actually get is a boring slasher that's absent of any grizzly killings or suspense.

Sure, there's the pieces of what could've been a good slasher, including the classic (perhaps overdone) ending with a circle of dead people in chairs after the killer reveals themselves and an ending that leaves things wide open.  Overall, this movie doesn't have enough creepiness or slasher-ness to warrant a repeat view.  Too boring, too predictable, and missing those horror elements we crave.