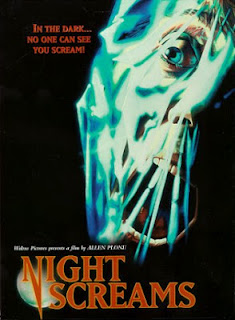 Image Releasing's presentation of Night Screams isn't the best transfer, nor does it have any extras, but with that aside, the film itself proves to be an entertaining excerise in b-movie fun.  It's amusing when it's not supposed to be, almost making fun of the slasher tropes without the filmmakers seemingly realizing it.  It was probably made as a cheap rip-off without any intention of being quality, but that's where the b-movie factor bumps this film up from crap to your tricket to schlock town.

With plenty of boobs, bad hair, bad clothes, obvious red herrings, bad dancing, a prison break-out of three criminals that barely has anything to do with the plot until the last two minutes of the movie, a bunch of people playing teenagers who are really in their mid-to late twenties, and that open ended finale that we saw coming right from the start, Night Screams celebrates every slasher cliche with an impish gusto.  The gore's weak, but there's enough fun in here to forgive the low hemoglobin index.  I give it a B-, but a hearty B-.
Posted by Alan Spencer at 7:20 AM