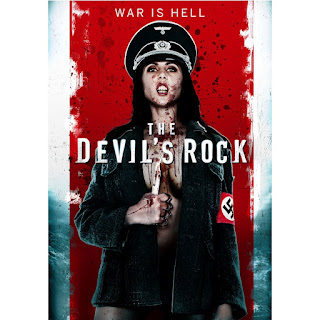 Nazi movies seem to be a thing of the past.  You had Inglorious Basterds from Tarantino, and the Uwe Boll Bloodrayne movies (if you can count that as a solid movie, though the third one wasn't so bad), but from a horror and exploitation standpoint, Nazi movies are few and far between.  That's not to say there isn't a reason for that.  It's a sour subject for obvious reasons, but of strong historical importance.  History is meant to be told so as not to repeat itself.  The question is always, is the material told in good taste?

In the case of The Devil's Rock, the material is in good taste.  We can move on from the offensive side of the subject and get to the horror.  Indeed, The Devil's Rock is taking place at a time during the war when Nazis are doing their obvious evil things.  A few rogue soliders go to an island to throw off the Nazi regime from attacking Norway.  Upon investigation, a trio of soliders infiltrare a near empty Nazi base.  Inside, bodies are gutted and blood is everywhere.  The Nazis are doing their normal sick shit--or is it something else?

The movie is simple in plot and design, but it works.  The colors, the film, the direction is all well-shot.  I don't want to give too much away, but the build-up to the end is well worth it. I  really dug how the movie takes its time getting to the monster.  It's all worth it.  There is a demon, yes.  The body count is low, but the quality of death and the movie itself is very high.  The atomsophere and overall story-telling is well done. Professionals with a low budget shot this movie.  If only Hollywood could learn from filmmakers like these.

I give this movie a B+ with a high recommendation.