For the average horror fan, 80's shot-on-video will mean absolute poison.  If you like easy viewing, these kind of obscure titles are out of the question.  For everyone else...still a hesitant maybe.

Yes, Sledgehammer is basically like watching a family video.  It's shot in one location, in a single apartment, with the occassional outside shot of a red house.  You get a bunch of adults partying it up like normal people do.  Ridiculous food fights, drinking and yucking it up (even pouring booze on each other and acting like Neanderthal people).  You get silly side drama, like a hot chick who can't get to second base with a guy she's been dating for months (ladies, we've all been there; the guys just won't put out!).  Another couple where a guy won't commit to marriage.  Relationship drama, that's the last thing you'd expect from Sledgehammer, but there it is. 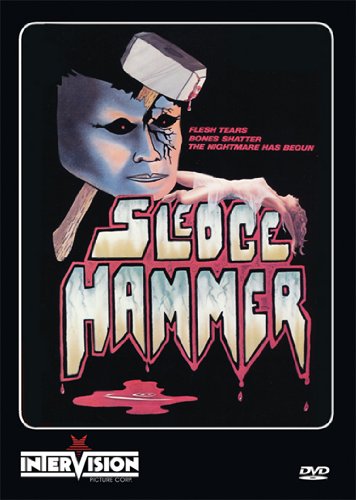 To the horror!  The first half is funny at first, then it gets old.  Once we get to the horror, this obscure entry in the slasher genre gets interesting.  I don't want to give away too many of the juicy details, but the flavor of this is supernatuaral slasher with synthesizer scores and blurry white walls that add creepiness to the film (though I'm not sure how much of this was accidental).

I don't know, there's something here that really took me by surprise.  The last thirty minutes does manage to get creepy (though repetitive) as our masked killer goes about dispatching people, though I wish the sledgehammer was used more as opposed to the kitchen knive deaths that dominate the kills.  I've watched shot-on-video before, and this has a leg up over the rest, but that's not to say this movie's going to win over the general public, or even fans.

Give it a shot if you're feeling daring.  It does do a few things right, though the viewer has to get over the low, low budget limitations and the sheer strangeness of watching what feels like a family video movie.  Limited recommendation for those out there who've seen it all and need another fix at any cost.
Posted by Alan Spencer at 7:36 PM