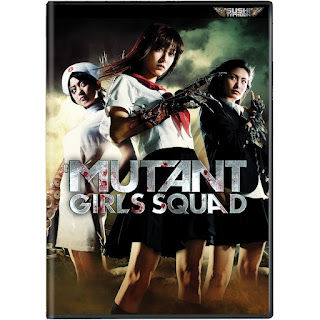 Those of you who've seen the flicks Machine Girl, Tokyo Gore Police, and RoboGeisha know what you're getting into when watching Mutant Girls Squad.  Insane gore, hyper-crazy plots, and random madness that only increases the closer you get to the final scene.  Machine Girl was my favorite of the insane super gory Japanese genre, but Mutant Girls Squad definately gives MG a run for its money.

Imagine X-men on crack, lead by a male geisha who has the ambition to crush all humans.  Throw in our main girl's newly found mutant powers and her moral question "it's wrong to kill humans, isn't it?" and you've got the basic plot.  What makes this movie special is the frenetic action sequences and what the fuck moments that lend these films such watchablility.  Some times it works, some times it doesn't, but in MGS, it succeeds.

Mutant Girls Squad, nor the Japanese genre of horror films, won't be everybody's cup of tea.  This one's a good start if you haven't seen one before, and for those who dig it, you won't be disappointed, and that's really the bottom line.  I give this one an "A".  Damn, it's good to be a horror fan.
Posted by Alan Spencer at 8:34 AM