"Never go against the will of the die." 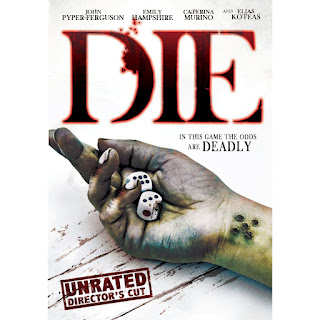 Straight out of the gate, this is a Saw rip-off, and a very blatant one at that.  It makes me think back to the George Romero Dawn of the Dead Italian rip-offs back in the day.  So if Die is basically a rip-off, does it take the exploitable parts of Saw and run away with them, or does it simply take the concept and do absolutely jack shit with it?  Rip-offs don't have to be a bad thing, but as with many movies, it's a case by case verdict.

We get unhappy people at a crossroads in life held captive in rooms.  A guy with dice and a gun sets up challenges for our entrapped people to overcome.  Unlike Jigsaw from Saw, this guy doesn't have any theatrics, or has a super cool method of operations.  We're in a boring warehouse without the cool traps.  Without the cool traps, oh no!

Instead, we get a gun, or a syringe with poison, or some other way to die less cool.  No cool traps.  Just a guy giving two people a way to die that's really basic and saying, can't you do this to another person, or will you die instead of inflicting this upon them?  If you don't do anything, the guy simply shoots the other person in the head.  Oh, I just stifled a yawn.  Really.  That's it?  Yep.  Afraid so.

And we get asides to enjoy a lame-o police investigation, just like Saw, but again, way less interesting.  A bunch of putzing around to fill the 90 minute film span.

Why is it so hard to make a decent rip-off?  It should be a slam dunk.  I guess that's the difference between people trying to make a quick buck versus someone trying to exploit a concept and make a fun horror film.