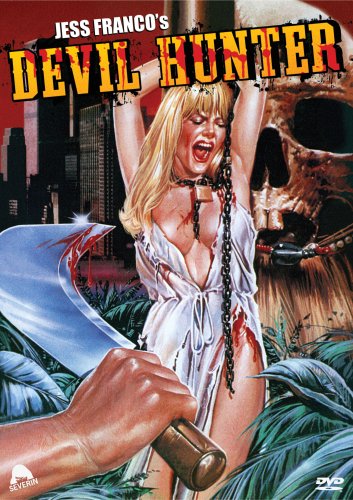 Jess Franco is probably one of the weaker directors in the foreign sleaze/horror trade.  I guess you could call him bottom of the barrel in many ways, though Bloody Moon isn't a bad slasher movie.  But Devil Hunter, oh man, is it bad.  I'll admit ten percent of this movie is entertaining.  That's not very much.  And not nearly enough to even qualify for the so bad it's good moniker.
Devil Hunter is really a product of the cannibal/jungle cycle due to the success of Cannibal Holocaust.  So Franco hops on the bandwagon and makes a movie about one (yes, one!) buggy eyed cannibal who eats people.  Add a goofy subplot about a movie star who is kidnapped, put in the jungle with a band of bad guys, and send a bad ass (Al Cliver) to retrieve them from the cannibal island, all the while avoiding this single cannibal guy.  Sounds cool on paper.  You get nudity, and two scenes of poorly done gore, and that's really about it.  The rest is bo-ring.
The film is full of inept direction, namely scenes that last far long than they need to be just to drag out the running time.  People walking from place to place, shots of stock footage jungle, and the times it could get juicy, the movie shies away big time.  Poorly shot, a plot that could've been very entertaining, are all shot to shit.
Final grade, D-
Posted by Alan Spencer at 11:22 AM