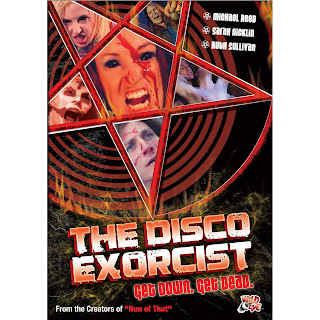 This movie's got a bit of hype attached to it.  You've got to have it to sell it, so what's the low down dirty goods about The Disco Exorcist?

I'm all about independent cinema.  Take independent cinema trying to recreate the grindhouse, exploitation era, and you've got my interest.  The trouble is the movie doesn't quite pick a side between comedy and horror.  It jumps from one to the other without enough sense of continuity.  If I'd take individual ten to fifteen minute chunks of the movie at a time instead of the big picture, I'd have high accolades to give The Disco Exorcist.  But if I'm being critical...

There are genuine moments of funniness and horror, but it's an odd melding.  Maybe I'm upset because the look of it was old grindhouse horror.  You could've had old school exorcism awesome-ness if it weren't for the humor.  Plus, the jokes, the puns all come forced and trying way too hard.  The budget shows at times, and that's okay, but when the story has trouble coming together, the viewer tends the get critical.

But there's a lot of good here.  Nudity.  Nudity.  Nudity.  There's also some great moments of gore as well, it's just, well, this fan wanted more horror and less stupid sexual humor.  I can get that just about anywhere, but solid old school vintage horror grindhouse throwbacks are few and far between.  It's worth checking out if you're used to lower budget films. Rental quality, not so much owning quality, I'm afraid.  Fun, and I really wanted to love it, but I wasn't one hundred percent won over.  Seasoned fans should give it a whirl for sure.  Many people might disagree with my review, so check it out for yourself if you're still curious.
Posted by Alan Spencer at 5:53 PM