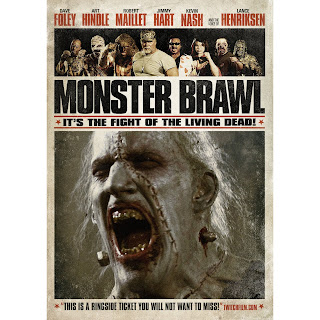 Monsters fighting each other!  Lance Henrickson narrating (and saying Mortal Combat phrases after good punches and monster moves like "Fantastic")!  Dave Foley as a commentator!  No way this can be bad.  Uh uh.  Nope.  Not a chance!  Throw in battles like Cyclops vs. Witch Bitch.  Lady Vampire vs. The Mummy.  Werewolf vs. Swamp Gut.  Zombie Man vs. Frankenstein.  The promise of cinematic gold.

Imagine short introductions to the monsters, then they meet up at a cemetery, walk onto a ring, and do battle as two commentators give us annoying, not funny commentary.  This happens over and over again ad nauseum.  No real connecting story, or conflict.  The movie lacks a pulse, thus making it flat.  Plus, the monster make-up effects leave something to be desired big time.

Okay, the idea is fun as shit.  But to bring monsters together in a ring, it's very difficult to write a movie around that concept alone.  Hell, they went through various scripts and treatments of Freddy vs. Jason before they came up with something worth filming.

That said, there is ambition here.  You get the heart of a moviemaker who wants to entertain, there just isn't enough of a story, or any real rise and fall of conflict or events, to keep the viewer interested.  No main characters.  No tension.  Just introductions to monsters, then they fight in a ring.  Bo-ring.

I couldn't resist renting this movie.  Such promise.  Interesting premise.  The writers just didn't take it anywhere.  Unfortunately a big let down.  Avoid, especially if you've got a ton of movies in your to-watch list.