I realized the other day that a few of my recent movie reviews on this blog happened to be "Video Nasties," which is a classification of movies banned in the UK back when home video was in its infancy.  I've been hard on the list of films so far, so I'd like to give a few examples of a few diamonds in the rough in this collection of "nasty" movies. 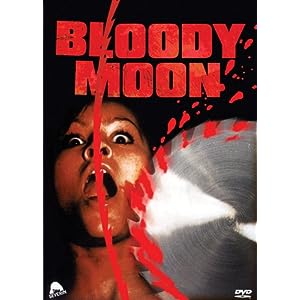 I'll start with "Bloody Moon."  I've never been a huge fan of Jess Franco's films, but this one actually stands out from his fount of euro-horror/sleaze.  I won't give too much away, but this slasher movie actually works.  It's got a lot of nudity, some really good kill scenes (especially one involving a logging saw--delicious), and it's overall seedy nature lends it that special quality missing in a lot of similar slasher knock-offs of its time.  The soundtrack is absolutely atrocious.  In an interview with Jess Franco, he said the soundtrack was supposed to be Pink Floyd, but it didn't work out in the end--big fucking surprise considering this is a low budget movie.  I give it a solid 3.4 out of 5 stars.  Pretty darn good, and Severin's release of the DVD is a top-notch transfer with all the gory goods and nudiness intact.  Thank you Severin! 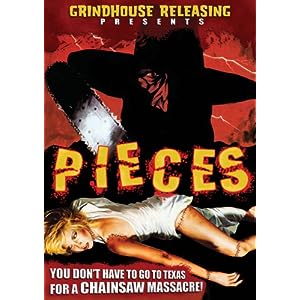 "Pieces" has got to be in my top five favorite slasher movies of all time.  The premise of a killer wanting to put together a jigsaw puzzle with a nude chick on it together for real is sick and twisted enough, but throw in some really over-the-top kill scenes, a college campus "Casanova" who's really good with the ladies, enough cheesy red herrings to occupy twenty slasher movies, and Christopher George's performance, and you've got b-grade bliss.  This movie delivers, no matter if the plot or the characters can't be taken too seriously.  I do take it seriously because it's that awesome.  It works on an impish level, and I love that kind of humor dervied from a movie where people tried to take a ridiculous idea seriously.  I'm not knocking it, keep in mind.  And I cherish the "Grindhouse Releasing's" uncut DVD with a beautiful transfer.  If you haven't seen this one make it a priority, especially if you're a slasher movie fan. 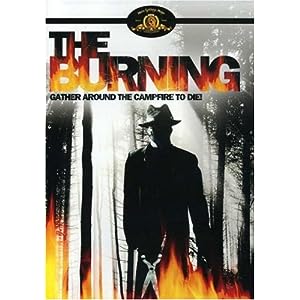 I'll finish part one of my "Nasties" list by mentioning "The Burning."  I think this should've been "Friday the 13th Part Two."  It's got Tom Savini special effects and that distinctive 80's slasher feel with enough sleaze and gutter humanity greasiness to it to win its way into my heart.  The premise is simple, a summer camp caretaker gets burned in a prank gone wrong, and later, the campers who go to the same camp in the future get stalked and killed.  What's different here is that the campers who end up being knocked off don't deserve to be killed, really.  They had nothing to do with the accident where the killer got burned.  We've got some good kill scenes, but what really makes me like this is how I feel after watching it.  Innocent people die, and that's the horror of it.  It's got enough darkness and real grime to it to stick to my ribs, and I've watched it multiple times.  Good stuff.   Good nasty.
Posted by Alan Spencer at 8:44 PM