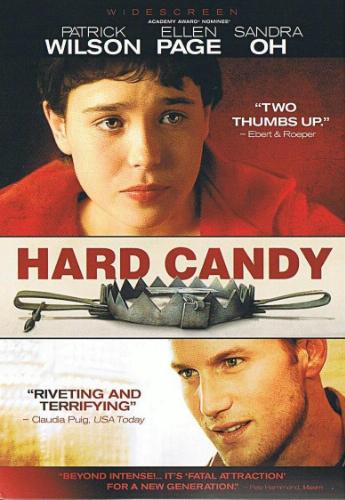 For starters, I can't say this is a straight horror film, but its characters, motives, and the way the movie's intentions unfold are extremely horrifying.  "Hardy Candy" is the very definition of uncomfortable tension.  Back when I was taking creative writing classes, teachers would always emphasize putting likeable characters in your story, a person the audience can cheer for.  In "Hard Candy," the narration tricks you along every step of the way.  You're not sure who to like or cheer for, since the story is literally only between Ellen Page and Patrick Wilson for the entire film.  They are both very questionable characters facing obviously immorally wrong things.

This film strings you out on mystery, but ultimately, the movie has a satisfying conclusion.  I really respect the writers and filmmakers who take on such risky  material as pedophilia.  Most people in general don't want to think about these people in our society, yet they're out there.  What would you do if put in this situation?  This movie, like many thrillers or horror movies, puts you in the line of fire and makes you consider the terrible underbelly of our society.  And if you were worried, this movie is far from pro-pedophilia.  I don't want to give too much away, because the story relies on cunning twists and turns, but if you're in the mood for a slow burn with lots of suspense, and you like your morals to be challenged, give this one a shot.
Posted by Alan Spencer at 5:35 AM