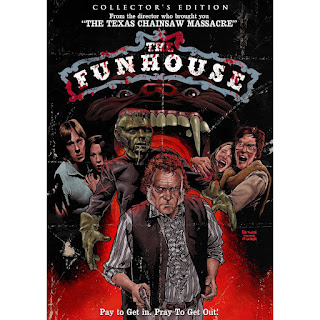 I'm new to Tobe Hooper's The Funhouse.  I thought I was going into a sort of slasher film that happens at a carnival.  That's not exactly right.  What I got was something way better.  So slasher fans, you might need to change your expectations with this one.  The Funhouse focuses more on mood, eeriness, and a certain seediness that comes with the traveling carnival experience.  A group of friends visit the local carnival and basically witness a murder.  Once the surprise is unleashed mid-movie, it only spirals out of control from there to a pretty suspenseful climax.  Very good stuff here, worth a re-visit for the people who dub this film only "average."

Shout! Factory has also done a major service with the updated film transfer.  The great image quality really elevates the film because the movie's effectiveness really depends on the dark and creepy looking sideshow props.  The dark scenes aren't dark to the point you can't see what's going on.  Shout! Factory keeps rolling out forgotten gems and classics, The Funhouse being no exception. 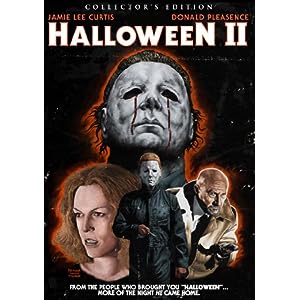 Another recent release from Shout! Factory is Halloween 2.  I didn't think much of this sequel when I first watched it many years ago, but like The Funhouse, the updated transfer really allows colors to pop and the dark mood and atmosphere to really come through.  My main criticism of the movie itself is how Jamie Lee Curtis and Donald Pleasence seem to have limited screen time, so there's not really a strong main character, only lots of small character threads.  The creepiness of being stalked at a hospital is effective.  The bloody moments, what few there are, come off much better with the new transfer--it's all about the little things.  There's also a funny mistaken identity death, where a poor trick-r-treater wearing a Michael Myers mask gets hit by a car and burned.  Certainly better than the later sequels, though only okay judged on its own merits, this one's a worthy addition to any fan's collection just because of the juiced up re-release. 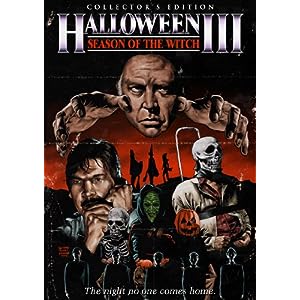 Yes, the movie isn't about Michael Myers.  So what?  There's plenty of sequels with him in it, so come on, give this one a chance already!  Halloween III really is a underrated flick that deserves more love (and it gets the love; this release is hands down the best image quality and filled with the most extras).  Halloween mask makers are the bad guys wanting to do bad things to our children.  An advertising campaign, a catchy song, a commercial contest on Halloween night, what child can resist?  What I like about this movie is its playful approach to horror.  It's both creepy and at times funny.  The use of mechanical machines and Halloween lore really impressed me.  What really hinders this film is the ten to fifteen minute lull between the second and final act where we seem to lose touch with our two main protagonists.  Once we get them back, the ending's actually more effective than I remember it.  Cult classic indeed.  I'll put it out there, this movie is better than Halloween 2.  The spirit of horror really comes off in funny and scary moments in Season of the Witch.  Love it!