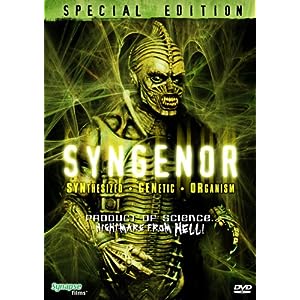 This movie screams Syfy channel movie if Syfy channel existed in 1990.  The main difference between the crappy CGI made-for-cable movies and "Syngenor" is nostalgia.  It screams early 90's trying to come to terms with the end of the 1980's.  This movie is full of fake rubber suited monsters, but damn it, they're physical costumes.  People had to put effort into making these special effects.  Think "A-Pix" flicks like "Ice Cream Man" and "Jack Frost" (the killer snowman movie) or even "Chud 2: Bud the Chud."  These were the good old days where middle of the road movies that were direct to video were actually half-way interesting, despite their production downfalls.  Overall, with this movie, you get a potent mix of cheesy acting, poor effects, and the funniest swat team to ever grace celluloid.

Okay, the last 30 minutes of this flick is what really counts.  There's a ton of meandering with a company ran by David Gale of "Re-animator" fame in the first hour that gets pretty droll.  It goes on and on about how "Syngenor" was designed to fight battles for the United States, the monster being a super solider that can quickly reproduce.  Blah, blah, blah, but once you get the funny swat team battle under your belt, the rest is pretty awesome for a cheapie flick.  I even felt shades of "Frankenhooker" and "Re-animator" at the very end when the Syngenor mutates and changes yet again.  The last half hour is where it's at, so you might be tempted to skip the first hour if you view the movie again.

So sure, the movie is "average," but I give "Syngenor" more credit for its fun last half-hour.  Skip the first hour, and you've got a descent slice of entertainment.  I give this one a low "B."