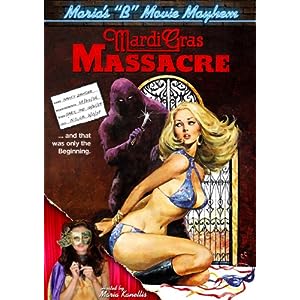 Okay, I'm going to start doing movie reviews on my blog, and I'll start with a really weird obscure film.  I just bought the Code Red DVD release of "Mardis Gras Massacre."  The film has the hype of being a "Video Nasty," one of the films banned in the UK for its extreme violence and nudity.  Meh.  The movie is underwhelming, really, once you actually see it.
A lot of people have said this is a take on "Blood Feast" by Hershell Gordon Lewis.  Sorry, but "Mardis Gras Massacre" falls extremely short of that comparison.  I love Hershell's film, despite its shortcomings, but this piece of crap takes the cake!  The film takes forever for a kill to actually happen, and when it does, it's just a close-up of a fake body cast being sliced open and the killer digs around and pulls out an enormous heart that's probably a real pig heart.  It's the same killing scene over and over again with a different prostitute.  Self-righteous man kills "evil women" (who are prostitutes, as I mentioned) over an alter to sacrifice to the gods, and it happens over and over again.  There's no real attempt at spicing it up or doing cool camera angles.  The side story with the detective is boring and tedious.  No hammy fun at all.  Cheap can be fun, but man, cheap isn't fun in this case.  It's depressing.  I can only imagine what the people did to pass the time in the theatres during this film (if it ever made it to any theatres).
Okay, so I've sat through a lot of crap in my time.  I really have suffered in the process of being a horror fan.  And maybe I'm asking for it taking risks with movies like this.  But this movie was BORING.  It's inept in every way possible.  I love movies like "Microwave Massacre" and "Shatter Dead" and other low budget fare, and it doesn't bother me if certain aspects of the production are lacking, but in the case of "Mardis Gras Massacre," the movie is just shit.  It's not so bad it's good.  It's bad.
In the end, I add it to my growing collection of movies with trepidation.  It'll probably end up next to an equally crappy movie called "Boarding House," which, what do you know, is another "Video Nasty."  Go figure.

Grade: F
DVD release: C
Extras: C (Didn't exactly care for the Maria Kanellis host spot, but maybe on the next DVD release, she'll do better. And the interview with William Metzo wasn't the best either. I guess it's hard to care about a movie that sucks so bad.)
Final Words: BIG let down.
Posted by Alan Spencer at 9:39 PM